Against all Odds: Jackson Alum Aims to Reform Politics in Brazil

Daniel José Oliveira MA ’15 came to Jackson with the lofty aspiration to reform Brazilian politics.  Four years later, Daniel represents the most populated state in Brazil as a member of São Paulo’s legislature and is making his dream a reality. 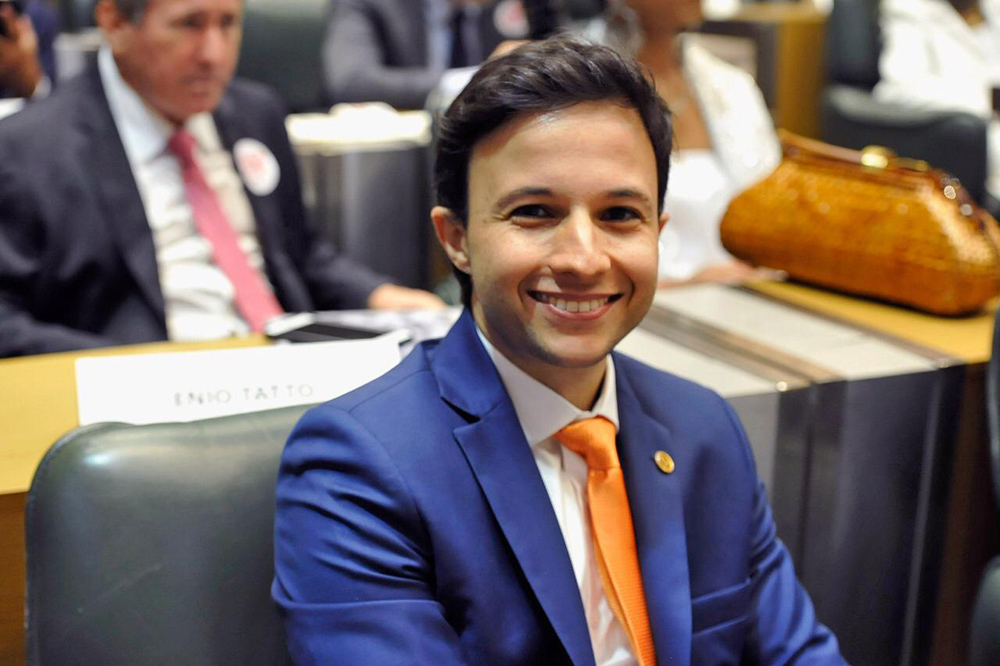 Take risks and be uncomfortable.

This is the career advice that Daniel Jose Oliveira MA ’15 followed when he decided to leave a profitable career at JP Morgan to start a nonprofit aimed at reforming education in his native Brazil, and later, to run for elected office.

Daniel, the youngest of 11 children who grew up in a modest family in São Paulo’s countryside, won a scholarship to a study economics at a Brazilian university and worked his way to a job at JP Morgan. Despite his success, Daniel felt like he wanted to make a bigger impact than he could working in the financial markets. He left his job and moved to Jordan to work with Iraqi and Syrian refugees. It was an eye-opening experience, one that he says broadened his perspective on what people are capable of doing.

“During my time there, I understood that if I want to make an impact, especially in vulnerable people’s lives, I would have to study more and think more about how I could impact my own region. In order to have a long-term impact, I realized I would have to change the institutions,” he explained.

Daniel decided to apply to graduate school at Yale Jackson. He liked Jackson’s small class sizes, the freedom to create his own curriculum, and the opportunity to study one topic through multiple lenses.  At Yale, Daniel found many outlets to learn about enacting change.  For example, General Stanley McChrystal’s semester-long course taught him how to build great teams, and the mentorship of Ernesto Zedillo, former president of Mexico, gave him valuable insight on leadership.

Daniel says he uses this wisdom daily in his current role as a member of São Paulo’s legislature, the most populated state in Brazil. He ran on a platform of anti-corruption and education reform, both issues that he is passionate about.

“The only thing that made me have the opportunities that I had was to have a good basic education. Without this, I couldn’t have enjoyed any other opportunity that I enjoyed along the way,” Daniel said. “Good institutions drive long-term development.”

After graduating from Yale, Daniel returned to Brazil, where he helped to build a consulting firm in public education. The experience allowed him to understand the real situation of public education in Brazil, and to identify the types of policies that could be improved. The issue became a key part of his platform when Daniel decided to run for office in 2018. After campaigning tirelessly across his home state of São Paulo, Daniel received 183,480 votes in 582 municipalities and was elected as deputy for São Paulo state, one of the youngest representatives ever elected to the legislature.

In addition to his Yale education, Daniel benefited from training by an organization he co-founded, RenovaBR, which trains young Brazilians to run for office. RenovaBR received 4,000 applications for its first class of aspiring leaders, and Daniel was among the 17 from the inaugural group who were elected to various offices.

“I’m very optimistic about how things can change in Brazil if we have better political leaders,” he said. “If we want to build a modern country with a strong democracy, we need to have people with all perspectives, but with the right values and principles, who have a strong will to serve and unshakeable honesty.”

It’s a gamble that Daniel hopes more young Brazilians will take, as he works to brighten his country’s future.