George J. Mitchell, who served as a U.S. Senator and the Senate Majority Leader, joined former Secretary John Kerry for a conversation about their diplomatic experiences and the foreign policy challenges facing America on December 1, 2018. 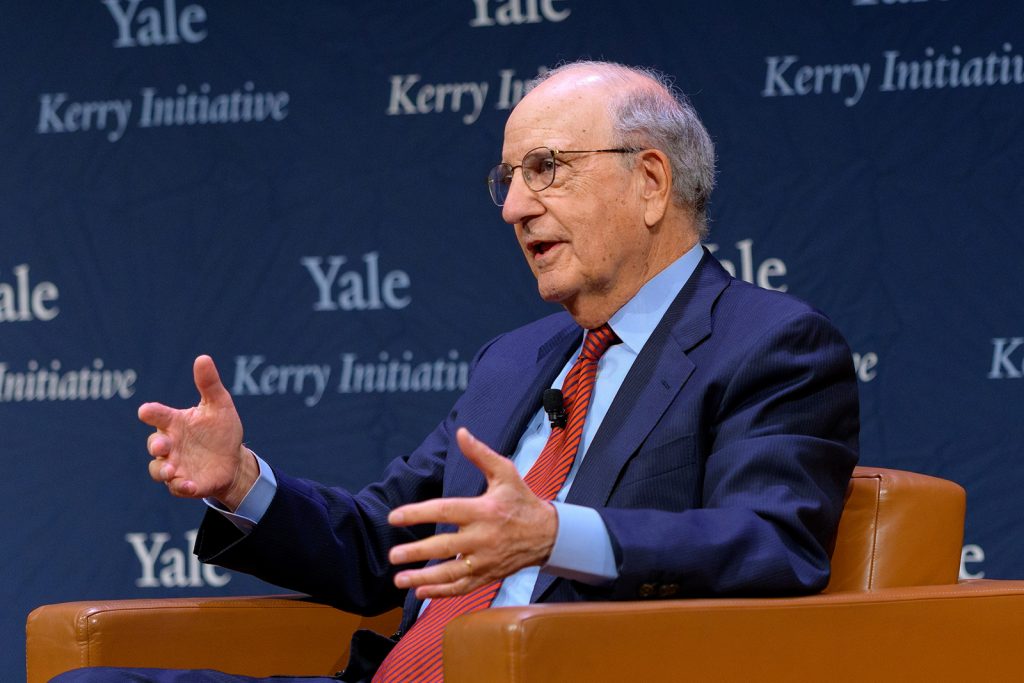 On December 1, 2018, George J. Mitchell, who served as a U.S. Senator and the Senate Majority Leader, joined former Secretary John Kerry for a conversation about their diplomatic experiences and the foreign policy challenges facing America.

Read a recap of the event in our news section. John Kerry served as the United States’ 68th Secretary of State from 2013 to 2017. As America’s top diplomat, he guided the Department’s strategy on nuclear nonproliferation, combating radical extremism, and the threat of climate change. His tenure was marked by the successful negotiation of the Iran nuclear deal and the Paris Climate Agreement. From 1985 to 2013, he served as a U.S. Senator representing Massachusetts, and was Chairman of the Senate Foreign Relations Committee from 2009 to 2013. He served in the U.S. Navy, completing two combat tours of duty in Vietnam for which he received a Silver Star, a Bronze Star with Combat V, and three Purple Hearts. He received his undergraduate degree from Yale and his law degree from Boston College Law School. He currently serves as the Distinguished Fellow for Global Affairs at Yale University and the Visiting Distinguished Statesman for the Carnegie Endowment for International Peace. George Mitchell has had a long and distinguished career. He served for several years as Chairman of DLA Piper, now Chairman Emeritus. Before that he served as a federal judge; as Majority Leader of the United States Senate; as Chairman of peace negotiations in Northern Ireland which resulted in an agreement that ended an historic conflict; and most recently as U.S. Special Envoy to the Middle East. In 2008 Time Magazine described him as one of the 100 most influential people in the world. Senator Mitchell is the author of five books. His most recent books are a memoir entitled The Negotiator: Reflections on an American Life, published in May 2015 and A Path To Peace, published in November 2016.