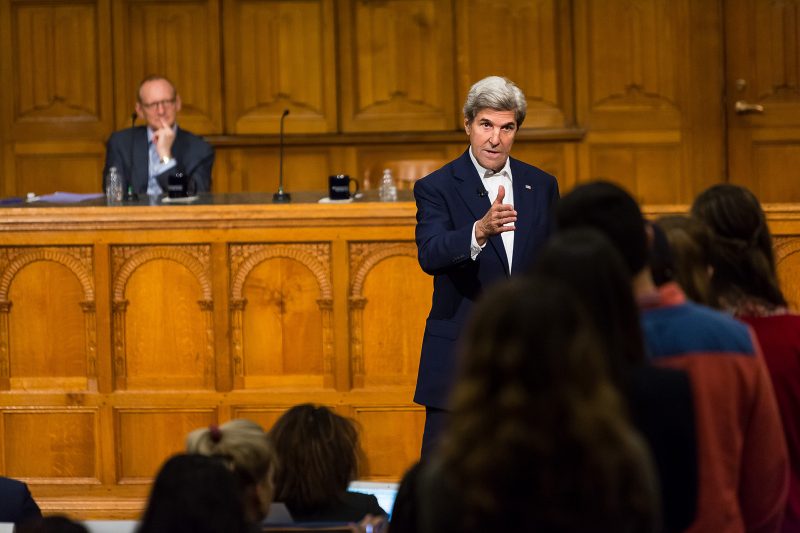 The first thing former Secretary of State John Kerry ’66 did when the Obama administration was over was to join the Women’s March in Washington, D.C., he told a capacity crowd in Yale Law School’s Levinson Auditorium on April 27.

There, he said, he witnessed an “astounding” energy and sense of possibility, and it is one of the reasons he feels optimistic about the future of the United States, despite some grave concerns facing the country. Among these, he noted, are the rapid transformation of the workforce, governmental claims of “alternative facts,” and such global threats to security as extremism, terrorism, climate change, the Syrian war, and North Korea’s nuclear capabilities.

He urged members of his audience — the majority of whom were students — to devote their own energy toward being politically and civically engaged, protesting if necessary, and using their voices and vote to hold government leaders accountable.

Kerry’s talk was the inaugural event of the Kerry Initiative, an interdisciplinary program that the Yale alumnus and statesman will oversee as the Distinguished Fellow for Global Affairs at the Jackson Institute for Global Affairs. Through the initiative, which officially gets underway next fall, Kerry will partner with scholars from across Yale to research and discuss issues of global importance, and will also lead a student seminar and host conversations with global stakeholders to develop new approaches to solving problems.

Before taking questions from the audience, Kerry spoke briefly about a range of topics, including the importance to democracy of individual engagement and commitment. He said that he continues to believe that individuals can and do make a difference in the world.

Pointing to such world events as the “wrenching and horrible” situation in Syria, Kerry said this is hardly the first time that the world has been rocked by large-scale violence and war. His own days as a Yale undergraduate were filled with political crises and strife, he noted, pointing out that the Cuban missile crisis took place in his freshman year; John F. Kennedy was assassinated in his sophomore year; the “Bloody Sunday” demonstration over African-American voting rights took place in Selma, Alabama, during his junior year; and in his senior year, Vietnam forced students to decide between going to graduate school, serving in the military, or moving to Canada to avoid the draft.

Nevertheless Kerry acknowledged, “Even with that context, I could look every one of you in the eye today and tell you I can’t think of a time in the history of our country where it has been as complex [as it is today], where the world is changing dramatically at a pace that is industrial-size.”

He urged students to “sit down and grapple with why there are more failed and failing states [in the world] … [and] why we are gridlocked in this supposedly greatest democracy on the planet.”

During his speech and in response to audience questions, Kerry touched on the following issues:

On young peoples’ reluctance to serve in government: “Well, you don’t have to work under it; you can work helping to shape and mold it,” Kerry said in a response to one student’s admission that many of his peers are ambivalent about government service. “The greatest accountability with respect to the people making the difference is the ballot box.”

Kerry recalled how he helped organize a 1970 Earth Day protest by 20 million Americans over toxic waste sites, including Ohio’s Cuyahoga River, which was so polluted it caught on fire in 1969. These same activists made their voices heard in the 1972 election by voting out of the office 7 of 12 members of Congress who were nicknamed the “Dirty Dozen” for voting against the environment. These actions helped bring about the Clear Air and Clean Water acts, among other environmental protections, Kerry said.

“The only way I see us ultimately pulling back from the brink, if you will, is by making sure you do go into the process and you change the process and you hold it accountable, and then you make sure you’re going to be one of those people who is working day to day to guarantee the next generation a better world.”

America’s role in the world: American voters’ support of Bernie Sanders and Donald Trump in the most recent presidential election, Kerry said, reflects citizens’ political “outrage.” Nonetheless, he claimed, America is “still the hope of the world.

War in Syria: Kerry said that he believed that the United States missed the opportunity to negotiate a settlement in Syria in 2012. He emphasized that negotiation — and not military action — is the only prospect for peace in the war-torn country. Complicating that process in Syria, he said, are the many actors in the conflict: Russia, Hezbollah, ISIL, Sunnis, Shias, Kurds, and Turkey among them.

“The greatest frustration I left this administration with was the sense of unfinished business [in Syria] because I thought we had a better hand to play,” Kerry said. “I wish we had played it full and early.”

“Alternative facts”: Kerry decried the current political atmosphere wherein there is not consensus about the facts. “Holding people accountable to words is really critical in a democracy,” the former secretary of state said. “I think part of that is restoring dialogue and having the kind of dialogue in which people can agree there are certain foundational facts that come of that conversation. If we can’t do that, we are going to have an impossible time trying to build consensus to make the choices that democracy requires us to make.”

Europe and NATO: Asked whether the United States should incentivize European Union members of NATO to share in the U.S.’s military burden abroad, Kerry responded, “We do bear a big burden … [W]e basically need what I call a new Marshall Plan in the world. … I think there’s a new model for the 21st century.”

He called the rebuilding of Japan and Germany after World II “the best investment we ever made,” and continued: “We need Europe to continue to stand up for freedom, liberty, fairness, opportunity, speech, right of trial, not being summarily arrested. We’re already seeing a trend in Hungary and Poland and a number of countries where the political space is closing in a little bit. It’s dangerous.”

Kerry noted that sea level rises can already be seen in Boston, where the water at high tide is coming over the seawall, and in Miami Beach, where the mayor has ordered the elevation of roads that have continually been flooded.

“The solution to climate change is not something you have to go out and discover,” Kerry told his audience, adding, “It’s there. It’s called energy policy. And we have sustainable energy capacity in wind and solar which is now competitive. It beats coal.”

Iran nuclear deal: “Iran had 12,000 kilograms of enriched nuclear material. It needed to go to another level of enrichment to make a bomb. It had a big infrastructure devoted to that effort. … Now with the deal, {Iran has] a limited stockpile of enriched material of 300 kilograms. For 15 years, we are tracing daily every activity by television cameras and inspections of their centrifuges. We have 130 additional people on the ground in Iran inspecting their facilities.

“Are we better off giving them the 15 years and letting the world see that we’re willing to try to negotiate a reasonable approach to nuclear power and that we’re prepared to have reasonable inspection, or do we want to go bomb them today because we want to bomb them today? I know what I think the answer to that is,” said Kerry. “I think most Americans think we ought be wise and play this out.”

Reasons for optimism: Kerry ended his talk noting that progress has been made in Africa in drastically reducing the number of babies born HIV-positive, as well as in reducing global maternal mortality, curing diseases, curbing nuclear weaponry across the globe, and cutting the global poverty level to below 10% for the first time in history.

He said he would be especially optimistic “if we raise the numbers of people who vote in America and actually take responsibility in this democracy,” and told the young people in his audience:  “I’m optimistic because of you,” noting the ways in which they make connections with each other across the globe on social media, further creating possibilities for understanding and peace.

Watch a video of the event