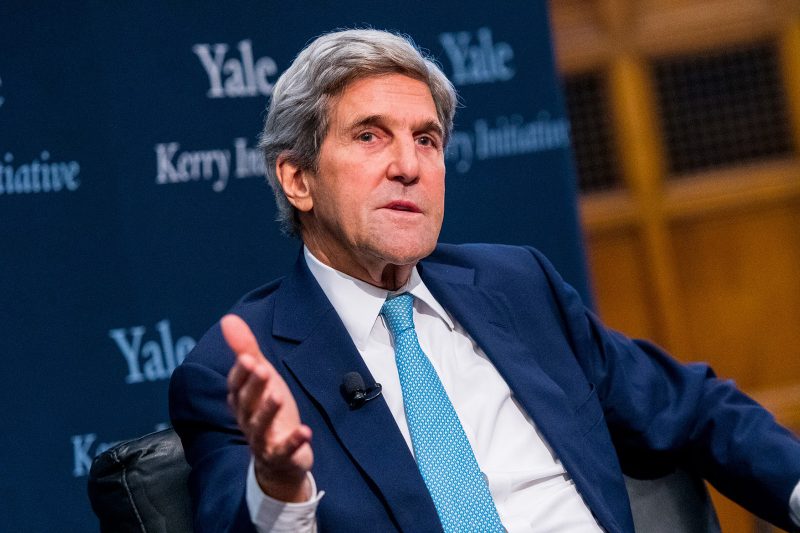 President Joe Biden quickly declared climate change one of the most urgent threats facing the country and the world, and he’s tapped a familiar Yale figure to lead his administration’s global response to it: John Kerry ’66.

For the former Secretary of State, who was named presidential climate envoy in November, the cabinet-level post is the latest chapter in a long career of public service, including 28 years in the U.S. Senate. Over the past four years, Kerry has sought to instill a commitment to service in his students in the Kerry Initiative, an interdisciplinary program he founded within Yale’s Jackson Institute for Global Affairs to examine pressing global challenges through teaching, research, and international dialogue.

Even as his new role in Washington commands most of his attention, Kerry will remain in touch with his namesake Yale initiative, both directly — visiting with Kerry Fellows, for example — and through his former chief of staff, David Wade, who will now lead key elements of the initiative. Kerry will participate in classes and events as his new government duties allow.

“I have thoroughly enjoyed the last few years here at Yale, and the issues we worked on are at the heart of what I’m going back into government to work on again, working with our allies and partners to tackle the climate crisis,” Kerry said. “I’m continually inspired by the talent, enthusiasm, and ability of Yale students. They think beyond themselves, and they have great ideas, and they’re terrific sounding boards for me in these new responsibilities.”

Since joining Jackson in 2017, Kerry has taught and collaborated with undergraduates and graduate students across schools and disciplines, sharing his insights and experiences as they sought solutions to the world’s most intractable problems, among them the climate crisis. He also has brought to campus prominent figures in diplomacy, politics, journalism, and business — as well as the occasional movie star — for a series of high-profile events.

The initiative’s Kerry Fellows program has further provided dozens of students from Yale’s professional schools, Graduate School of Arts and Sciences, and the college the opportunity to work especially closely with the veteran statesman for a full academic year, assisting him with writing, research, and issue advocacy. Some fellows were invited to travel with him overseas to engage with thought leaders and titans of industry about climate change.

Kerry is one of many Yale faculty and alumni working in prominent positions in the Biden administration. Dr. Marcella Nunez-Smith, an associate professor of internal medicine, public health, and management, co-chairs the president’s COVID-19 advisory board and leads a White House task force on health equity; Abbe Gluck ’00, the Alfred M. Rankin Professor of Law, joined the Office of White House Counsel to work on COVID-19 and other health care issues; and Janet Yellen GRD ’71, a member of the board of Yale’s Tobin Center for Economic Policy, is the new treasury secretary. In all, dozens of Yale alumni have been asked to serve in a variety of key positions throughout administration. (See the bottom callout for more.)

Kerry’s new role is further evidence of what distinguishes the Jackson Institute’s teaching program: the chance to learn directly from practitioners with deep policy experience on critical global issues. Continued access to the person guiding the White House’s international response to climate change will be a boon to students both within Jackson and across campus, said Director James Levinsohn.

“Secretary Kerry has contributed enormously to the Jackson Institute, providing students here and across the university the kinds of rich and unique experiences that make a Yale education special,” Levinsohn said. “We’re thrilled he will stay engaged with Jackson to the extent possible while pursuing his hugely important new assignment.

“And we’re confident that his work in the new administration will translate into a variety of unique opportunities for our students.”

The Kerry Initiative’s three components — a seminar on global diplomacy open to students across Yale, the Kerry Fellows program, and “Kerry Conversation” events — will continue under Wade’s direction, Levinsohn said.

This year’s class of fellows, 26 in all, will continue working with Kerry while he performs his climate envoy duties as allowed by government ethics rules, Levinsohn said, potentially providing them a range of exciting experiences and challenges.

“I think this year’s Kerry Fellows can anticipate some real-time lessons in high-level diplomacy on the frontlines of the climate crisis,” he said, adding that Kerry will likely make appearances in the global-diplomacy seminar and will continue hosting events with influential guests.

The former Democratic presidential nominee and U.S. senator has, apart from his work with the initiative, also supported the Jackson Institute’s ongoing transformation into the Jackson School of Global Affairs, offering advice, building relationships, and raising the institution’s visibility, Levinsohn said.

‘Failure is not an option’

One of President Biden’s first acts in the Oval Office was to reaffirm the nation’s commitment to the Paris Climate Agreement, a global pact Kerry helped to broker as secretary of state in 2015.

In the days that followed, Kerry took steps to show that the U.S. was again ready to be a leader in the global climate fight. On Jan. 25, he participated in the Climate Adaptation Summit, an online meeting hosted by the Netherlands, joining German Chancellor Angela Merkel, French President Emmanuel Macron, British Prime Minister Boris Johnson, and other world leaders. During the event, Kerry described the administration’s climate priorities, including a pledge to provide climate finance for vulnerable nations.

And he already has his sights on the 2021 United Nations Climate Change Conference, or COP26, scheduled for November in Glasgow, Scotland. He views the summit as a vital opportunity to strengthen the international framework established five years ago in Paris.

“To end this crisis, the whole world must come together,” he said last November while accepting his appointment as climate envoy. “… All nations must raise their ambitions together or we will all fail together, and failure is not an option.”

It’s a fight he’s been waging through the Jackson Institute for four years. In September 2017, he convened the Yale Climate Conference, inviting leading CEOs, governors, mayors, policymakers, scientists, and activists to campus to discuss pathways to a low-carbon and climate resilient future. The gathering reflected Kerry’s belief that climate change is a problem that doesn’t respect partisan boundaries: participants included both prominent Republicans, such as former Secretary of State and Treasury Secretary James Baker, and leading Democrats, including then-California Gov. Jerry Brown ’64 J.D.

The three-day conference was a campus-wide affair. Events were held at the School of the Environment, the Law School, and the School of Management.

During a closing plenary session, held in a packed Woolsey Hall, Kerry was joined by Oscar-winning actor and climate activist Leonardo DiCaprio for a discussion on civic engagement and activism. (During their conversation, DiCaprio noted that Kerry’s earliest foray into public life was organizing Massachusetts’ first Earth Day celebrations in 1970, underscoring the statesman’s career-long commitment to protecting the environment.)

The Kerry Fellows summarized the conference’s discussions in a report that included a toolkit for taking action on climate change.

In the years since, Kerry has continued to host events at Yale with all-star participants. During a series of “Kerry Conversations,” he brought to campus former U.S. Vice President and Nobel laureate Al Gore, former Senate majority leader and diplomat George Mitchell, and multiple Pulitzer Prize-winning journalist Thomas Friedman. His 2019 conference on challenges to democracy at home and abroad culminated with a forum featuring four former secretaries of state: Madeleine Albright, Condoleeza Rice, Hillary Clinton ’73 J.D., and Kerry, who moderated the discussion.

Who better to learn from?

The campus events drew large and enthusiastic crowds and media attention. But the Kerry Fellows program and a seminar Kerry taught has offered students something much more personal: the chance to learn about diplomacy and international affairs directly from a major American statesman.

As a member of the inaugural class of Kerry Fellows in 2017-2018, Riddhima Yaddav ’18, then a Yale College senior, wrote policy memos on climate change, contributed to Kerry’s speeches, and helped organize the Yale Climate Conference. She valued the opportunity to hear his insights and feedback on her work, and says the experience strongly influenced her thinking about global affairs, particularly the climate crisis.

“In fact, it’s what shaped my post-Yale career,” said Yaddav, now an analyst in the Environmental Markets Group at Goldman Sachs and a non-residential fellow in the Aspen Institute’s Energy and Environment Program. “It underscored to me the importance of combining thought leadership with real action — something that John Kerry embodies so well.”

Keenly interested in international climate policy and the diplomatic work needed to effectively address climate change, Lucas Isakowitz ’20 M.E.M. took Kerry’s seminar during the first year of his graduate program at the Yale School of the Environment.

“Who better to learn from about these issues than a former secretary of state?” he said.

After connecting with Kerry through the seminar, Isakowitz was selected to join the 2019-2020 class of Kerry Fellows, earning the chance to assist Kerry at COP25, in Madrid, in the fall of 2019, and at the World Economic Forum in Davos, Switzerland, in January 2020. He helped Kerry prepare for meetings, briefed him on the issues under discussion, and helped draft speeches and other public statements.

“He is an amazing person to work for,” said Isakowitz, a Presidential Management Fellow currently working at the U.S. Department of Agriculture. “He always made me feel like a I had a seat at the table, asking for my perspective while speaking with a CEO or head of state. He made me feel like I was there to add value. It was an incredible experience.”