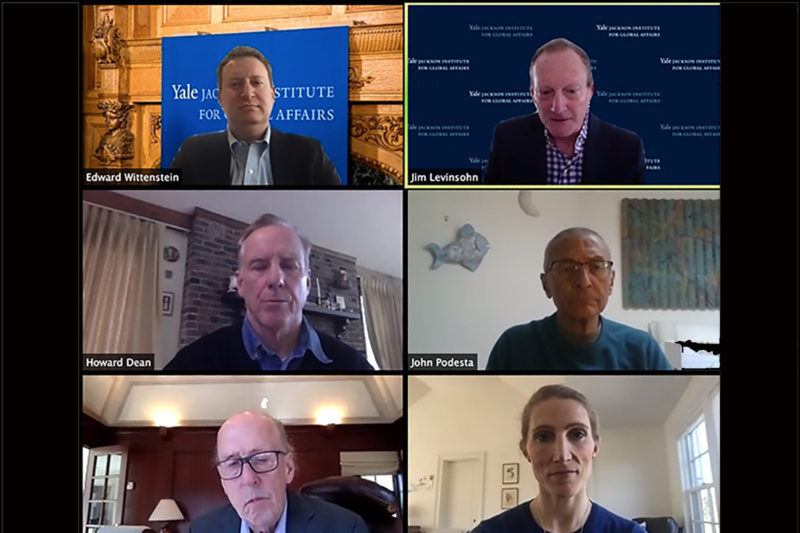 Diverse Perspectives on the Crisis

In the first event of Jackson's Virtual Discussion Forum series on COVID-19 and global affairs, four Jackson experts whose backgrounds range from public health to government and finance weighed in on the unprecedented global crisis.

In March 2020, Jackson launched its Virtual Discussion Forum series on the COVID-19 crisis and its far-reaching impact worldwide. 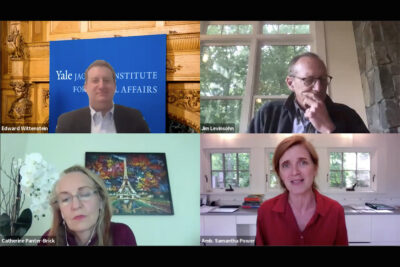 June 10, 2020 | How The Pandemic Will Shape International Politics

Panter-Brick and Power discussed how leaders can rebuild confidence in international institutions such as the WHO. Leaders will have to “be more persuasive” and not take for granted that people see the benefits of them. 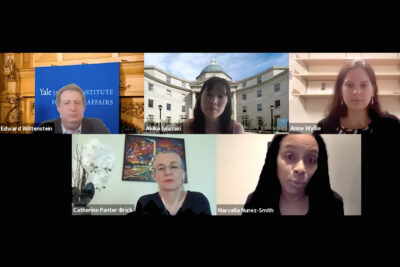 More than 140 attendees tuned in to hear about the latest findings in vaccine development, saliva testing, and antibodies and immunity. 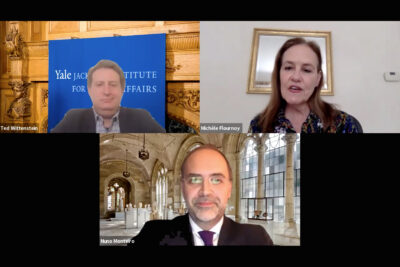 Michèle Flournoy, Former Under Secretary of Defense for Policy, Co-Founder of the Center for a New American Security, and Managing Partner of WestExec Advisors, and Nuno Monteiro, associate professor of political science at Yale and an expert in international relations theory, held a wide-ranging conversation. 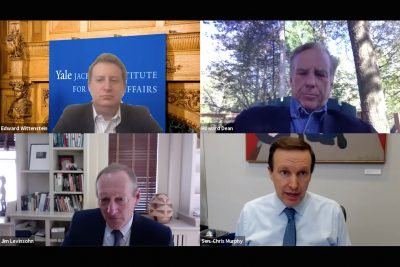 About 200 attendees tuned in for the May 20, 2020 Jackson Virtual Discussion Forum, “COVID-19 and Global Affairs: A View from the U.S. Senate,” featuring U.S. Sen. Chris Murphy. Gov. Howard Dean served as the moderator. 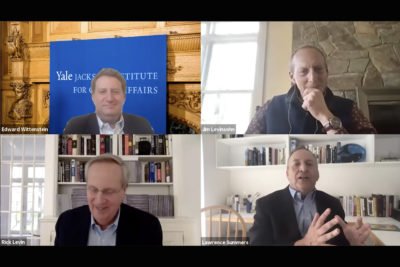 More than 500 attendees tuned in for the May 13 discussion, “Prospects for Recovery in the World Economy,” featuring Lawrence H. Summers, former Director of the National Economic Council, U.S. Treasury Secretary, Chief Economist of the World Bank, and President Emeritus of Harvard University.

“We’re in uncharted territory,” Summers remarked, likening the current situation to the aftermath of Hurricane Katrina, but on a national scale. “If you’re scared to leave your house, it doesn’t matter what the interest rate is,” Summers said. 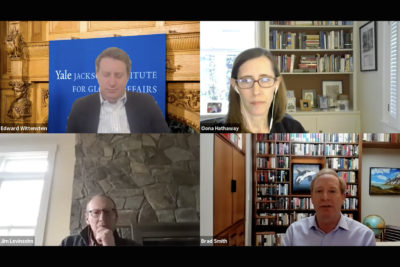 May 8, 2020 | Cyber Threats and Opportunities in the Digital Age

One of the world’s leading tech executives offered his insights on the technological ramifications of the pandemic. Brad Smith, the president of Microsoft and co-author of “Tools and Weapons: Promise and Peril in the Digital Age,” was the featured speaker in the May 8 installment of Jackson’s Virtual Discussion Forum on COVID-19 and Global Affairs.

Oona Hathaway, the Gerard C. and Bernice Latrobe Smith Professor of International Law and Director of the Center for Global Legal Challenges at Yale Law School, served as moderator for the conversation, “Cyber Threats and Opportunities in the Digital Age.”

Smith, whose company operates in 120 countries and had a “front row seat” on the crisis, was asked to comment on the economic and security implications of moving so many aspects of our lives online so quickly. Smith touched on the digital divide and the lack of broadband access as a barrier for many, and predicted a need for more digital skills as the crisis continues into the fall.

He offered some simple advice for improving security: use two-factor authentication. “It’s like putting on a seatbelt in a car,” he explained.

Smith also commented the need for multilateral cooperation and new global norms for cybersecurity. “The pandemic has shined a light on the issue,” he said, particularly on the importance of protecting our elections and our hospitals from cyber attacks.

“This is an opportunity to think harder on something that demands attention,” Smith said.

More than 280 attendees joined the online discussion and submitted questions. 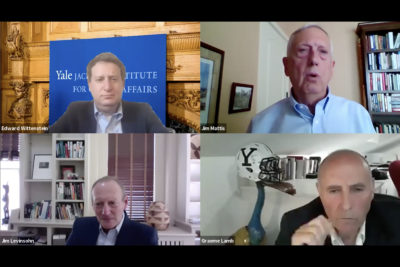 More than 380 attendees tuned in to the May 1 discussion, “COVID-19 and Global Affairs: The United States and Its Allies Under Stress” featuring Gen. Sir Graeme Lamb, former director of UK Special Forces and Commander of the British Field Army, and Gen. Jim Mattis, former U.S. Secretary of Defense and Commander of U.S. Central Command. 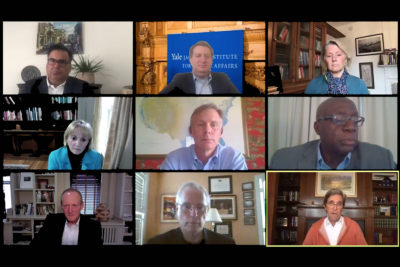 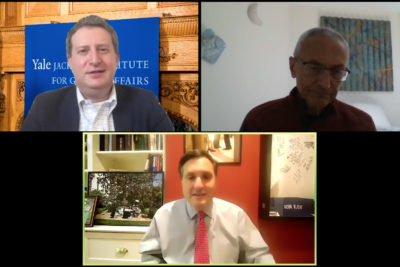 Panelists discussed the Obama administration’s response to the Ebola crisis; weighed in on the current administration’s handling of the COVID-19 pandemic; and offered their thoughts on what’s needed to roll out widespread testing and eventually, a vaccine.

They also took questions from the 165+ person virtual audience. 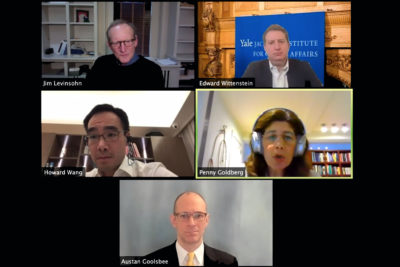 The talk was moderated by deputy director for leadership programs, Ted Wittenstein, with an introduction with Jackson’s director, Jim Levinsohn.

Panelists addressed a wide range of topics related to the economic turmoil resulting from the COVID-19 pandemic and the way forward. They also took questions from the 200+ person virtual audience. 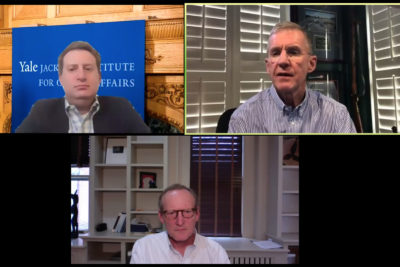 McChrystal kicked off the conversation by emphasizing the significance of the pandemic. “COVID-19 is going to change us dramatically. This is a big wake up call that we are globally connected and that globalization is here,’” McChrystal said.

The impacts of globalization, McChrystal explained, are seen clearly in both the fast spread of the virus across the world and COVID-19’s impact on all aspects of life. “For many parts of our lives, we are absolutely dependent upon other parts of the world. China is the one that rises to most consciousness. Most of our drugs are produced in China, all of our penicillin is produced in China,” he said.

McChrystal identified the ideal leader in a crisis as someone who is honest, competent, committed, and inspirational with a clearly directed plan that they are able to deliver to fruition. “I want that leader to remind me that I’m supposed to be a bigger person that I might want to be in that moment,” he said.

McChrystal also emphasized the need for coordinated action from the federal government. “There needs to be at the national level, the equivalent of a fusion cell… when I say fusion cells I mean entities that bring in different capabilities and expertise from FEMA to state government,” he said.

McChrystal fielded questions from the 280-person (virtual) audience on a variety of subjects, including what the United States can learn from global leadership; social cohesion during a crisis like COVID-19; the role of the military; and the far-reaching impact of the pandemic on the business sector. 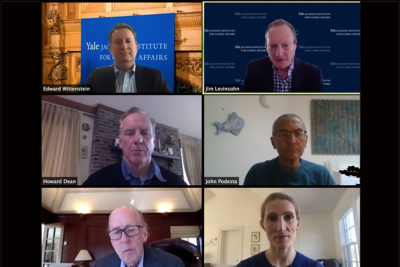 The panel discussion featured four Jackson Senior Fellows whose backgrounds ranged from public health to government and finance, including:

John Podesta was asked to comment on the role of executive leadership and engagement in times of crisis. “You have to give honest, direct, credible information to the public,” he said.