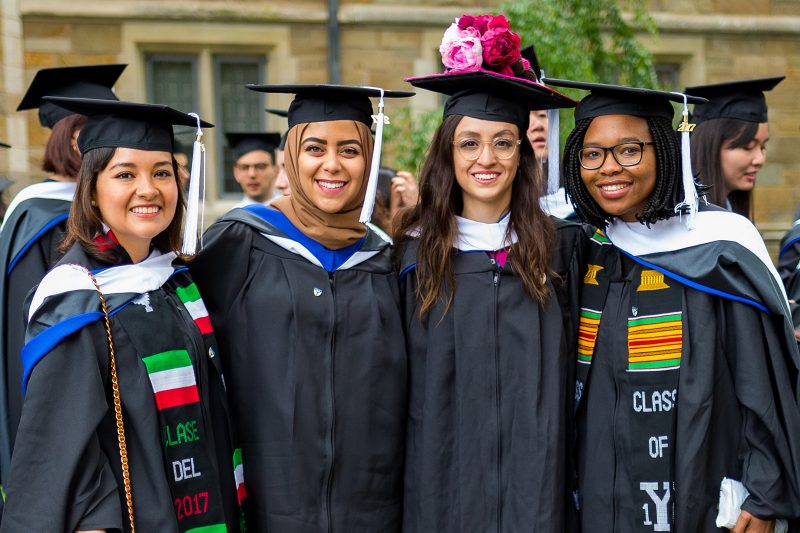 The Jackson Institute for Global Affairs celebrated its graduates today with a diploma ceremony and celebratory lunch at Horchow Hall. The Institute awarded 32 M.A. degrees and three M.A.S. degrees in Global Affairs.

Jackson students started the day with a 10:30 a.m. ceremony at Yale’s Old Campus, where the University symbolically conferred degrees on all undergraduate and graduate students from the Class of 2017. Jackson student Lawule Shumane M.A. ’17 served as marshal and accepted the symbolic diploma for M.A. graduates.

Grieger remarked on the broad diversity of academic interests among Jackson students as well their commonalities as a group: friendliness, dedication to building a community, and a strong sense of purpose.

“This cohort has done and will do amazing things. In fact, we’re all counting on you,” he said.

The ceremony also included remarks from Shravan Bhat M.A. ’17, who was selected by his classmates as speaker. Bhat emphasized the tight-knot student community at Jackson, offering humorous anecdotes about each member of the 2017 class.

Bhat also reflected on his classmates’ shared drive to make the world a better place despite the troubled state of affairs in many parts of the globe. “They see bad news and move towards it with alarming alacrity,” he said. “They don’t give up on the world and neither should you.”