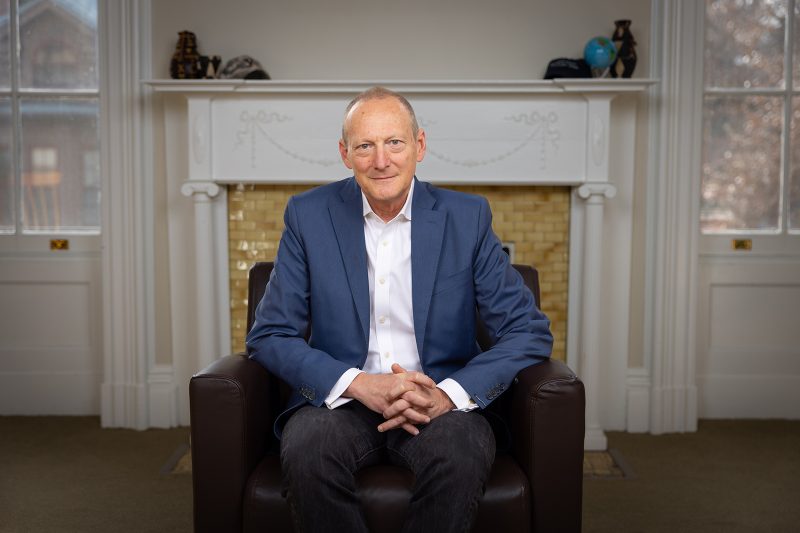 President Peter Salovey announced Jan. 18 that the Yale Jackson School of Global Affairs will open in the fall of 2022, and he named James A. Levinsohn, distinguished economist and educator, as inaugural dean. Levinsohn’s term begins July 1.

The school is currently known as the Jackson Institute for Global Affairs, and Levinsohn, the Charles W. Goodyear Professor in Global Affairs, is its founding director. In 2019, the Yale Board of Trustees approved plans to expand the institute into a professional school that will train and equip a new generation of leaders to devise thoughtful, evidence-based solutions for challenging global problems.

It will be the first new professional school at Yale since 1976, when the School of Management was established.

“The transition from the Jackson Institute to the Yale Jackson School occurs as communities around the world are facing profound challenges: climate change, war, migration, pandemic, resource scarcity, and political division,” Salovey said in his announcement. “The complexity of these problems calls for solutions built from great breadth and depth of knowledge, expertise, and perspective. By bringing together scholars, policymakers, and practitioners in political science, economics, history, law, and other fields, Professor Levinsohn will lead the Yale Jackson School in greatly enhancing our university’s ability to answer that call.”

Levinsohn, a renowned scholar of international economics, industrial organization, economic development, and applied econometrics, came to Yale in 2010 to lead the Jackson Institute, which had been established the previous April through a transformational gift from John W. Jackson ’67 B.A. and Susan G. Jackson.

“I’ve had the privilege of working with a fantastic team of faculty, university leaders, Jackson staff and students, and donors to get Jackson to where it is today and I very much look forward to continuing the journey,” Levinsohn said. “We will open the best-in-class school of international policy next fall, and I am hugely grateful to have the opportunity to lead this new School — Yale’s first in decades.”

The institute has thrived under Levinsohn’s leadership, launching several initiatives that bring new scholarship and teaching on international affairs to campus, including the global affairs major in Yale College, the Johnson Center for the Study of American Diplomacy, the Kerry Initiative, and the International Leadership Center. Several Yale programs have joined the Jackson community over the past decade, such as the Maurice R. Greenberg World Fellows Program, the Leitner Program on Effective Democratic Governance, the Global Health Studies Program, and International Security Studies.

“Part of our confidence in forming the Yale Jackson School of Global Affairs comes from our confidence in Professor Levinsohn’s ability to lead it,” said Scott Strobel, Yale’s provost. “The Jackson School’s mission is to help educate globally engaged leaders. Professor Levinsohn is himself a globally engaged leader in economics, public policy, and beyond. His expertise, his experience, and his commitment to living the school’s mission will be invaluable to the Jackson School in the years ahead.”

Over the past three years, Levinsohn has guided the institute’s transition into a professional school, Salovey said. He has worked with faculty members across the university to assess opportunities and challenges inherent in research and teaching in global affairs. These collaborations led to the creation of the master of public policy degree and upgrades to the institute’s curriculum.

He has recruited leading scholars from Yale and peer institutions to form the Yale Jackson School’s founding faculty and brought in eminent practitioners from across the world — including diplomats, journalists, and policymakers — to serve as senior fellows. These leaders in their fields teach courses and conduct research, consult with students about their career ambitions, and enliven campus with talks and other programming based on their experiences.

“Jim has assembled an outstanding group of faculty, senior fellows, and staff who are already offering a remarkable program,” said Pericles Lewis, vice president for global strategy. “I look forward to seeing the contributions the Jackson School will make, under Jim‘s leadership, to our understanding of pressing global concerns like peace and security, trade and development, and global health and climate governance.”

Last year, Levinsohn was elected president of the Association of Professional Schools of International Affairs, an organization of the world’s top schools of international affairs.

“Under Jim Levinsohn’s direction, the Jackson Institute is set to become one of the top global affairs schools in the country,” said Anne Patterson, a Jackson senior fellow and former U.S. ambassador to Egypt, Pakistan, Colombia, and El Salvador. “He is a great teacher, a great friend, and most importantly a leader with integrity and backbone. I am so pleased that Yale leadership has named him the new dean.”

Levinsohn has joint appointments in the Faculty of Arts and Sciences’ Department of Economics and in the Yale School of Management. His research reflects the Jackson Institute’s focus on multidisciplinary scholarship, intersecting with public health, economics, political science, environmental science, and other fields, Salovey said.

Levinsohn has studied the effects of internal migration on household well-being in South Africa and estimated the demand for sanitation in Bangladesh. He has published widely on trade policy, youth employment policy, foreign investment practices, and multinational corporations. His research projects have included studying the impact of HIV/AIDS on unemployment in South Africa and working with Sudanese refugees seeking compensation for forcible removal from their homelands. He also has analyzed the impact of environmental policies on the U.S. automobile market.

“What makes Jim such an effective leader is his ability to build community,” said Kenneth Scheve, the Dean Acheson Professor of Political Science and Global Affairs. “Global problems are hard and require lots of different people to solve them. Jim’s leadership and vision have made Jackson a place where students, faculty, and practitioners with diverse perspectives and skills come together to do exactly this.”

Levinsohn’s teaching has been recognized at Yale and, previously, at the University of Michigan, where he was a faculty member for 20 years. His research has been supported by major grants from the National Institutes of Health, the National Science Foundation, the Andrew W. Mellon Foundation, and other organizations. He has served on the editorial boards of the American Economic Review, the Journal of International Economics, the Review of Economics and Statistics, and the Journal of Economic Literature. He is a member of the Council on Foreign Relations and is a research associate of the National Bureau of Economic Research.

“Professor Levinsohn is looking forward to drawing on his substantial research, teaching, and leadership experiences to foster new academic collaborations and programs to support the work of faculty and staff and to develop additional educational initiatives for our students,” Salovey said. “One of his top priorities is to equip the next generation of scholars, practitioners, and policy makers with the ability to apply evidence-based decision-making to address global challenges.”

Levinsohn earned his B.A. from Williams College, his M.P.A. from the Princeton School of Public and International Affairs, and his Ph.D. in economics from Princeton University.

Read more about the future of Jackson