Diana Rodríguez-Franco visited Yale November 14, 2018 to discuss her book, “Radical Deprivation on Trial: The Impact of Judicial Activism on Socioeconomic Rights in the Global South.” 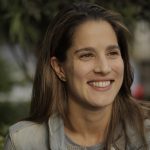 Diana Rodríguez-Franco, MA, JD, PhD, visited Yale on November 14, 2018, to discuss the central arguments of her book, “Radical Deprivation on Trial: The Impact of Judicial Activism on Socioeconomic Rights in the Global South,” which she co-authored with Cesar Rodríguez-Garavito.

The book is an empirical study of contributions by courts in the Global South to comparative constitutionalism. It offers an analytical framework for understanding these constitutional innovations and illustrates them with a detailed, qualitative study of the most ambitious case in constitutional adjudication in Latin America over the last decade: the Colombian Constitutional Court’s structural injunction affecting the rights of more than four million internally displaced people (IDPs) in Colombia, and its implementation process.

Rodríguez Franco is the director of the Environmental Justice division at the Center for Law, Justice and Society (Dejusticia) in Bogota, Colombia. She holds a Ph.D. and an M.A. in Sociology from Northwestern University, and a J.D. and B.A. in Economics from the University of Los Andes (Colombia).  Her work focuses on environmental democracy, environmental politics, the political economy of development, Global South constitutionalism, intellectual property rights and access to medicines, human rights, sociology of law, economic, social and cultural rights, and strategic litigation.

In her talk, Rodríguez Franco traced the case’s evolution over the last 10 years, from its origins to its effects on law, policy, politics, and public opinion. She also compared the implementation and effects of the ruling on IDPs to those of other structural rulings on the right to health, the right to food, prison overcrowding, and the right to housing in Colombia, India, and South Africa.